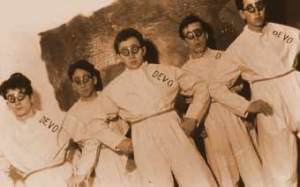 In the 70’s and 80’s, the experimental band/art-concept of DEVO represented a philosophical divergence from the norm – the norm of the masses and also the “norm” of the radical. Blurring the lines between the establishment and the experimental, Mark Mothersbaugh, DEVO’s front man, reflects this indefinable juxtaposition not only in his music, but in his two-dimensional art as well.

Mothersbaugh’s fine art imagery is as simple as it is perplexing. A blend of computer generated graphics, found imagery, paint, ink, and embossing, his work somehow makes one believe that even comic book characters have to wipe their own asses in the morning. While most of the population is dulled by the protocol of daily life, Mothersbaugh is always exploring mixing and matching hints, innuendoes and suggestions via one media or another. He considers himself an observer and his art is “One man’s view on culture.” 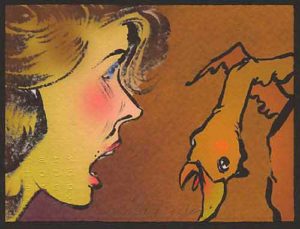 In September 2002, Mothersbaugh had his first solo show in over a decade at LUMP Gallery in Raleigh, N.C. The show was a huge success, and has inspired Mark to continue showing his “Postcard Diaries.” In November, Mothersbaugh was invited to show work in the ultra hip Juxtapoz Magazine 8th Anniversary Group Show at Track 16 Gallery in Santa Monica. Wild Banana’s Maui exhibit is his first stop on what is now a nationwide “Home-Front Invasion! Gallery Tour.”

When Mothersbaugh is not touring, you can find him in his Los Angeles based Mutato Muzika headquarters, where his offices and studio are housed in a pistachio green building shaped like a flying saucer. It is here that Mothersbaugh uses his musical magic to compose scores for movies, TV, and commercials. Not traditionally trained as a musician, he taught himself to read and write music after breaking into the industry, and now composes for and directs 110 piece orchestras. Pee-Wee’s Playhouse, The Rugrats, MTV’s Liquid Television, and The Royal Tenenbaums are just a few of the projects that he has scored.

Mothersbaugh’s artistic life took flight in his twenties, when, to avoid being drafted for Vietnam, he enrolled in Kent State University and earned a degree in fine art. In 1972, Mothersbaugh and fellow art student Jerry Casale formed DEVO, taking its name from the theory of De-evolution – the idea that instead of evolving, mankind is actually regressing. The whole concept simply started as a way of entertaining themselves. “It made the sound of things falling apart.” But then came the infamous Kent State – National Guard killings of 4 student protesters, and suddenly their message held a more immediate relevance

As it was, “electronic noise” in the early 70’s, in Ohio, was difficult for most locals to appreciate. “You’d have these long-haired factory workers relieved to be back from Vietnam, and here were some crazy asses on stage provoking them and calling them subhuman. They’d get pissed and act out. We’d have fistfights constantly. People paying us to quit. Getting beat up. The police stopping the shows.” Needless to say, the band left Ohio and tried their luck in NYC, where they pulled up in front of Max’s Kansas City and began playing on the sidewalk.

DEVO’s big break came with their short film, The Truth About De- Evolution, which won a prize at the 1976 Ann Arbor Film Festival. After seeing the film, both David Bowie and Iggy Pop took interest in the five-some and connected DEVO to their first producer, Brian Eno. Their debut album, “Q: Are We Not Men? A: We Are DEVO!” became an underground hit.

Throughout the DEVO years, Mothersbaugh also created his fine art, pumping-out several of his postcard-style creations nearly every day. “Since I never did them to show people, I didn’t care if I mixed mediums or if they got filthy or stupid. I like stuff that was kind of stream of consciousness. I’d do it, then I’d question, ‘Where did that come from?’ I’ve been making them for about 30 years now”

Mothersbaugh’s prints are disquieting, visual conundrums; our minds are not quite able to fill in the blanks or connect all the dots. He gives us no answers, only a curious tension. Short circuiting logic, yet leaving an impression, something memorable and ironic. 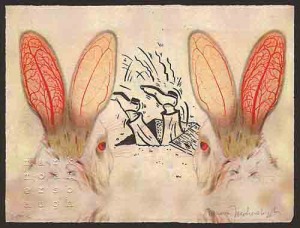 We interviewed this cult icon, visual artist, and successful musician via email… Here’s what he had to say:

Q: Did you do visual art as a child; were you involved in anything original/creative previous to Kent State?

A: “When I was a kid, I was legally blind, but the problem was correctable. I didn’t know I had the problem till I was 7 years old…when I got glasses. I saw trees, clouds, jet streams, etc, all for the first time ever! I immediately fixated on drawing these new additions to my life, and got pretty good at it. My teachers saw how well I drew these things, and started complimenting me on it. That was a defining moment for me. I hadn’t received many compliments like that until then.”

Q: Most people think of you as a musician, however DEVO is more than a group of musicians. Describe DEVO as the whole art concept that it is/was.

A: ” DEVO was a product of 5 concerned citizens from Akron trying to make sense out of that they saw happening in the world around them.”

Q: When you were there in the early days, in the scene, before you went big, did you know that you were making history in that moment? Tell us what was the turning point between artistic obscurity and a career.

A: “We certainly always thought we had important info to share. The whole project reached critical mass in ’75/’76 when we made our first films & recordings. We knew we had something then.”

Q: You & DEVO are internationally recognized cult Icons, what is fame like?

A: “The funny thing is, it all seemed to be over very quickly. Fame didn’t seem to last that long. We had a moment, but barely enough time to enjoy it.”

Q: What is the one moment that stands out in your 20+ years in the limelight? What has been the pinnacle so far?

A: “The most exciting time period in being an artist in my life was back in ’77, when we were playing clubs on the east & west coasts, with lots of excitement surrounding us. We were the buzz, and everyone was talking. We felt like nothing could stop us, and we were very unaware of all the things that could go wrong. We had no money, but it felt like we were at the center of an important movement.”

Q: You’ve met many talented and well-known people in show-biz and the arts, who do you respect the most? Who blows your mind?

A: “I’m always most fascinated with the folks who are at ground zero during formative periods in art and expression. Examples are Andy Warhol, The Beatles, The Rolling Stones, etc. In most cases, their careers lasted longer than my fascination, but I still respect them for what they were a part of.”

Q: Do you collect Art?

A: “I don’t really collect other people’s art, but I do collect found art… My pile of art is basically a concept & image bank. I collect things that I consider to be art, whether it was created to be art or not.”

Q: What do you think is the most important thing happening in art today? What’s the next great movement? Any words of advice to give to underground artists of today?

A: “I like Islamic Political art. I’m also interested in the whole JUXTAPOZ magazine scene, because I can relate to the lowbrow aesthetic. I’m not really sure what the next art movement is, and I can only give this advice to hopeful artists: It doesn’t matter what you do… just do one thing that is so good that people can’t ignore it.” 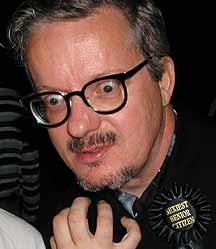 A: “I had high hopes in the early 70’s…before MTV…that music television would be much more than it became – a home shopping network for record companies. We thought it had the potential to be much more. That said, I grew up being turned on by technology, and the upside of capitalism. I was influenced by artists who liked to blur the borders between commerce & art. Art has a long history of paying its dues to wealth & royalty, and I see capitalism as a way to liberate art for the people. Technology provides access to the arts for everyone these days.”

Q: We know you have done ads for some of the worlds most loved/despised corporate giants like McDonalds and Target. Do you believe in these companies? If so, why. And if not, what is it like to work for them regardless?

A: “The one thing that should’ve been learned by the hippies & the punks is that anarchy is easily co-opted by fascists. Subversion is the only real way to affect change, hence the success of Viet Kong & Jihad warriors. There’s no better place to affect change than from within the belly of the beast. DEVO always thought of themselves as an enema for a constipated society.”

Q: How do you see yourself today? Is your life today anything like you imagined it would be, in art school…as DEVO was getting started? What do you see for your future?

A: “I see myself as part of a world that is far more devolved than I had expected. I thought that everyone would be taking smart drugs, and that technology would’ve made the world a better place by now. Unfortunately, that’s not the case. Devolution moved quicker than we ever expected, and things are far more devolved than we ever could’ve imagined.”